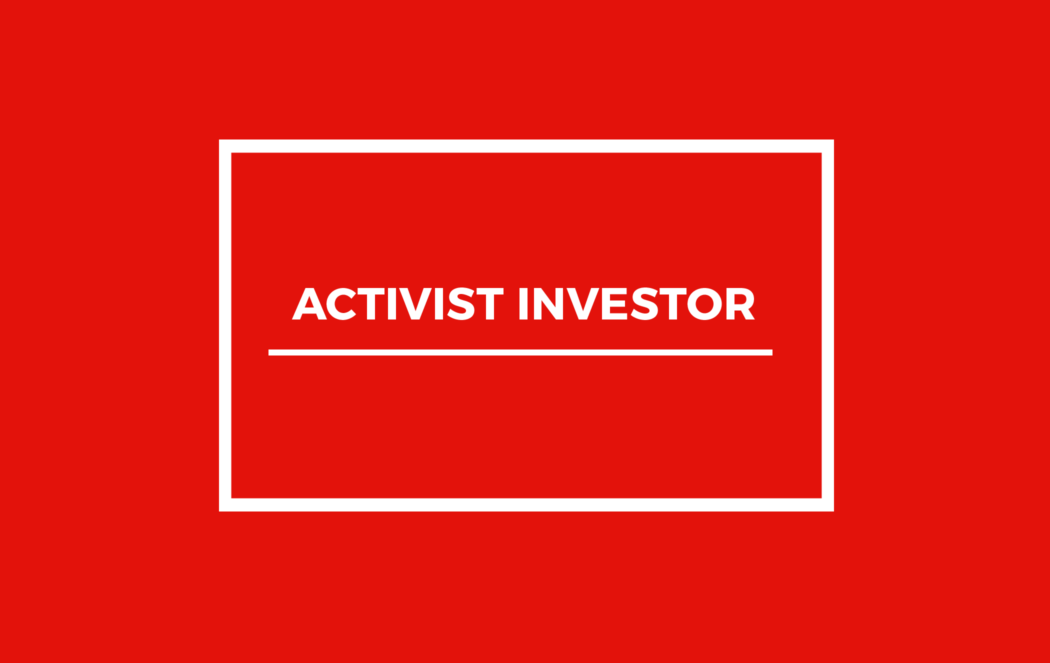 What Is An Activist Investor?

The activist investor definition and the term activist shareholder defines an individual investor or institutional investor, such as an activist hedge fund, that purchases a non-controlling minority stake of the voting class of a public company’s equity securities to effect changes within the target company.

Activist investors do not own, control or manage the corporations in which they invest. Instead, they rely on the support of institutional investors and pension funds to exert influence and exercise their shareholder rights.

In the United States, activists must disclose their activist stake by filing a Schedule 13D with the U.S. Securities and Exchange Commission (SEC). This requirement is triggered whenever an activist investment passes the 5% threshold of the voting class of a company’s shares.

No other turn of events has shaped public companies’ operational and financial decision-making as thoroughly as the rise in shareholder activism and activist investing strategies in the wake of the global financial crisis of 2008.

Notable activist investors, such as Carl Icahn and Nelson Peltz, have been remarkably successful in agitating for change at a number of high-profile activist targets in recent years. In 2014, a total of 344 companies worldwide were targeted by activists, up 18% from the 291 recorded in 2013, according to a report by Activist Insight, causing shake-ups at big corporate names that resulted in 75% of activist demands being at least partially satisfied, up from 67% in 2013.

Whenever the CEOs and management of public companies lack appropriate incentives to maximize shareholder value, good corporate governance becomes essential. Without it, managers run the risk of maintaining their position regardless of performance while receiving excessive executive compensation and depleting free cash flow on value-reducing acquisitions.

Moreover, evidence shows that large pension and mutual funds tend to be ineffective monitors of corporate governance issues due to conflicts of interest and reputational risks.

Activists and activist hedge funds, on the other hand, are unique in that they maintain more concentrated portfolios and are subject to fewer reputational risks and regulatory constraints. This permits the activist investor to function as an important intermediary in global equity ‪markets‬ by driving sustained improvements in operating performance and shareholder value at public companies.

What Is Activist Investing?

Even though hedge fund activism and activist investor strategies have transformed in recent years, the primary activist themes remain the same and can be categorized as follows:

While high-profile activist campaigns garner the most attention and despite how activists are portrayed by embattled management teams, many activists prefer to approach companies privately in an effort to address the issues in a collaborative manner. Nonetheless, in certain instances, activist investor tactics will incorporate steps to put pressure on target companies prior to escalating the activist engagement:

Due to the financial expenses and the time associated with launching a proxy contest and pursuing litigation, relatively few activist investor campaigns proceed past letters and presentations to a company’s management and board. This is also true for target companies that increasingly seek an amicable settlement in an effort to avoid a contentious battle in light of the changing attitudes of institutional investors and proxy advisors.

Carl Icahn is still arguably one of the most famous activist investors within a select list of top activists and corporate governance zealots. Over the years, the notable billionaire investor has established a successful shareholder activism track record with publicly traded companies, pushing CEOs and engaging boards in an effort to increase the stock price and shareholder value of undervalued enterprises. Still, a question worth asking is how these agitators manage to exert so much influence over some of the biggest corporations in the world and whether shareholder activism is good or bad for companies?

The answer varies depending on the activist and how they choose to engage the CEO and shareholders after building an equity stake in a target company.

Carl Icahn is the founder of Icahn Associates and majority shareholder of Icahn Enterprises, a diversified conglomerate holding company. His mere presence and disclosure of a new stake can cause an upward bounce in the share price of beleaguered stocks through the so-called “Icahn Lift”.

Nelson Peltz was an activist investor long before the term shareholder activism was popular. And while his corporate targets have grown in size, his focus has remained the same: Cut costs and boost sales. Since co-founding Trian Fund Management in 2005, he has faced only two proxy contests to gain board representation. The first was in 2006, when Heinz opposed his proposed slate of five new directors. The second was in 2015, when DuPont (NYSE: DD) opposed his proposed slate of four new directors.

Bill Ackman is one of the most famous hedge fund activists in the world. Not one to shy away from controversy, he has received a lot of negative attention due to his short position in Herbalife (NYSE: HLF) and his involvement in Valeant’s (NYSE: VRX) failed takeover bid of Allergan (NYSE: AGN). His firm, Pershing Square Capital Management, manages a highly concentrated multi-billion dollar portfolio that takes large stakes in a small number of companies, often accompanied by Ackman’s demands for corporate changes.

Jeff Ubben is the CEO of ValueAct Capital Management, the San Francisco-based hedge fund that has quickly made a name for itself as a quiet instigator at the forefront of activist investing. The firm, which has targeted more than 75 companies as of 2016, invests in — and turns around — undervalued companies. In many ways, the investment style can be likened to bringing a private equity strategy to a public company.

Dan Loeb is the CEO of Third Point, one of the largest event-driven hedge funds in the world. As a result, his firm’s holdings incorporate both activist investing as well as merger and risk arbitrage. Loeb’s preferred strategy is to acquire shares in troubled companies, replace inefficient management, and return the companies to profitability. One of his signature tactics involves the use of florid public letters to management while engaging shareholders.

Jeff Smith is the CEO of New York-based Starboard Value. The firm was spun off from the global alternative investment manager Ramius in 2011. While Smith is not yet as well-known as some of the more high-profile activists, his star is rising. In 2014, he succeeded in ousting the entire board of Darden Restaurants (NYSE: DRI) after a contentious campaign marked memorably by a nearly 300-page presentation that castigated the company for a host of sins, including not salting the water in which it cooked pasta and profligate breadstick distribution.

Activist funds and activist shareholders are increasingly using online platforms to engage and make their case for constructive dialogue. The importance of social media as an interactive platform for activist investors dates back to 2007 when an individual activist investor launched an online engagement at Yahoo which ultimately resulted in the company’s then CEO to resign.

The new normal for a growing number of public companies is active use of social media to live-tweet quarterly earnings calls, share YouTube video messages from leadership and post corporate blog updates to amplify annual meetings. Some of the more prevalent online engagements currently pursued by both the activist investor and the target companies include the following:

It is expected that social sharing and communication tied to activist investing will continue to increase in the future. If the past is any indication, activist investor funds will seek to remain innovative with their digital communications strategies and investor engagement approaches moving forward.

Twitter has a long-established record as the go-to communication platform for breaking, real-time news and information.

The appeal of the platform’s growing reach and real-time impact has already prompted a few shareholder activists, including Carl Icahn (@Carl_C_Icahn), to present their views and respond promptly to criticism through their personal accounts.

Since many more activists are likely to establish an active presence on the social network in 2016, we encourage your to subscribe to our Twitter lists to follow new activist investor resources as they continue to emerge:

Time will show whether the level of shareholder engagement will continue to increase as institutional investors become more involved in activism and more supportive of activism as a catalyst to bring to light potential shareholder value creation opportunities.

Although historically these investors have preferred to avoid supporting an activist investor directly, in today’s corporate environment there seems to be a distinct decrease in the number of “management-friendly” investors that were the norm only a few years ago despite the ongoing debates about reducing shareholder rights.

Back to Top
We use technologies, including cookies, to improve site functionality, provide you with a better browsing experience, and to enable our partners to advertise to you. Detailed information on the use of cookies on this site, and how you can decline them, is provided in our Cookie Policy. By using this site or clicking on "OK", you consent to the use of cookies.OKRead our Cookie Policy.